Thanks for checking in! WE DELIVERED!

"I can’t explain how lost and afraid I was… getting that box of letters made me so happy, I can’t even explain how happy I was. Just to see how many people cared, how many people took their time out of their day to show me support... your letters helped me emotionally and mentally. So from the bottom of my heart, thank you."

MIA'S HEARTFELT VIDEO OF "THANKS":

In her video, Mia bravely describes the emotional effects of being bullied and how peer support from the Be A Friend Project Ambassadors helped her to heal: 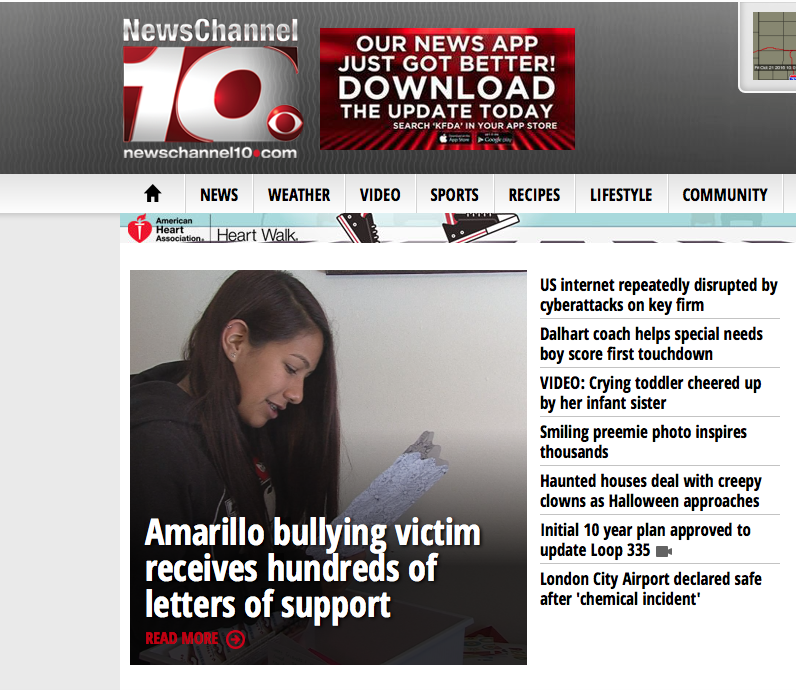 Mia's courageous journey of recovery from bullying and the Be A Friend Project was reported on by MARY COLEMAN, NewsChannel 10, Amarillo, Texas, and also featured an interview with teacher, Michelle Lancaster, who remains a SUPER Ambassador for the BAFP!

Mia is proof for young victims of bullying to stay strong because things will get better!

Two years after receiving her own Friend Mail, Mia agreed to be a part of the surprise presentation for another local bullying victim, "Marcus." Mia was interviewed by NewsChannel 10 Reporter, Mary Coleman, who reported on Mia's case in 2016. As an inspirational role model, Mia was asked to hand Marcus his bin of Friend Mail on stage at Bushland Middle School!

GO TO :38 TO SEE MIA INTERVIEWED AND HAND "MARCUS" HIS FRIEND MAIL:

For her FRIEND STRONG role in Marcus' surprise presentation - and for sending letters of support to other Friend Mail recipients, in 2018 Mia was awarded SUPER AMBASSADOR:

Mia's ordeal with bullies is every kid's nightmare.

Imagine being out with your friends at a skating rink, having a great time, when some other kid starts making fun of one of your friend's clothes. You summon the courage to SPEAK UP for your friend and tell that mean kid, "Leave my friend alone. Pick on someone else" and they do... YOU!

This is where Upstander Mia's story begins as a victim of physical and cyber bullying in March of 2016 when she was at a skating rink with her 7th Grade friends. After Mia spoke up, the girls hit Mia... repeatedly... until the police were called. But, it didn't end at the skating rink. It only just began on social media where those girls started an all-out campaign to hurt, demean and terrify Mia, over and over again.

While a report has been filed with the Amarillo Police Department, CYBER-bullying laws in Texas are not strict enough to allow officers to move forward and take action. :(

The family, threatened and out of options, took it upon themselves to move Mia to a different school this year, away from her bullies. Mia feels safer, but she desperately misses her true friends from her old school. The family is also championing for stricter laws against bullying and more resources outside of the school system.

Coping with the trauma of being physically assaulted and verbally abused and threatened (or, in one word... BULLIED) is always a long recovery, especially for a child that her mom describes as having a "very good heart, so sweet, who cares so much about others and who wants to believe that everyone is her friend." The mom reports that her outgoing, adventurous daughter who used to be happy to show off her braces, doesn't smile anymore. Typical of depression, Mia prefers to stay alone in her bedroom behind a closed door, not even wanting to play with her younger sisters who she adores.

Traditional bullying and cyberbullying are alike in many ways. Traditional bullies and "cyberbullies" are equally interested in purposely hurting their victims, over and over again.

Yet, here are a few ways that cyberbullying is uniquely painful...

Cyberbullying can happen 24 hours a day, 7 days a week, and reach a kid even when he or she is alone. It's almost impossible for the victim to avoid his or her attacker. Even when the victim is not immediately aware of an attack, cyberbullies can create on-line posts degrading their victims whenever they decide. Cyberbullying is constant, not isolated to the school yard or a bus.

Unlike traditional bullying which might only be seen by a small group of people, cyberbullying messages and images can be sent to hundreds within minutes. Sometimes, victims don't even know who started the attack, giving cyberbullies extra protection.

Cyberbullies are "disconnected" from their victims. They don't have to witness the pain they're causing which makes the bullies less likely to feel guilty, so they often become even more aggressive.

Deleting these horrible messages, texts, and pictures is pretty much impossible after they have been posted or sent.