Thanks for checking in! WE DELIVERED!

"Every night she gets in bed and asks me for her friends bin...

then she picks a pack of letters and starts reading out or looking to see what is she going to read. She loves her bookmarks and the "caterpillar" letters she got. She says that she has many friends all over and that she wants to thank them for her gifts." ~ Emily's Mom 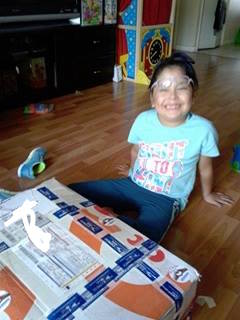 A miracle baby born prematurely at 25 weeks and just 1 pound, "Emily" was given only a 15% chance to live. She overcame overwhelming difficulties to survive, yet her mom, Cindy, says that despite this early fight for life, “nothing compared to being bullied in school at the young age of 6 years.”

Emily loved school. She had been attending an Exceptional Student Education program in her home state of Florida since she was three years old, the same age she taught herself to read! At the age of 4, she was diagnosed with ASPERGER’S SYNDROME which is at the high-functioning end of the AUTISM SPECTRUM.

Emily was so excited when she entered “big girl” Kindergarten. She did great her first semester, even with so many new rules and instructions to follow. Halfway through the school year, Emily had a “serial casting” done to both of her legs because she is a “tip-toe walker.” The casts on her legs train her muscles to walk without being on tip-toes. One day, after a few weeks of wearing the leg casts, she came home from school and asked, "Mommy, am I a handicapped person?" Cindy took time out to explain the meaning of the word "handicapped," yet looking back, she sees this question as the first red flag that her daughter had encountered bullies.

During Emily’s second semester, her behavior began to change. She started to have meltdowns and tantrums in school.  She had trouble sleeping and began crying every night, saying that she didn't want to go to school anymore. Her school performance dropped. These are ALL TYPICAL SIGNS THAT A CHILD IS BEING BULLIED. Regressing emotionally is often a possible sign of bullying or any form of abuse. Despite, the teacher wrote a note stating that she believed Emily’s new behavior was due to being forced to wear the leg casts. But Cindy knew something was wrong and Emily wasn’t talking about it.

As Emily's mom tells the story….

One night, about 3 months later, she found Emily crying hysterically again. She hugged her and told her that, no matter what was going on, she needed to tell her so she could fix it.  Sobbing, Emily asked, "Can you fix it?" Her mom replied firmly, "You bet I can!" Emily exhaled and looked relieved... then Cindy heard what any parent will fear...

"Mommy, two boys bother me and my friends, they call us names and they 'swipe' our legs.  We have to hide in the tunnels of the playground… they call me handicapped…"

Cindy was VERY PROUD of Emily for finally finding the courage to SPEAK UP.  However, the image of her resilient baby hiding in playground tunnels from bullies, unable to run with her leg casts, and being called names meant to hurt like “handicapped” also devastated Cindy.

Turned out, Emily’s “bullies” were 1st Graders with their own special needs who were not supposed to be on the playground with the Kindergarteners at recess. The bullying, like most all bullying, took place out of sight of adults. Investigations and corrective actions were slowly meted out, both at the school and for the boys and their parents. As promised, Mom did “fix it,” yet Emily still needs time to heal emotionally.

Emily read books about bullies with her mom and worked with therapists to make her more aware of when kids are "not being nice" which is often difficult for kids on the Autism Spectrum to recognize. Now, the 7-year-old can better identify when children are being mean to her. She's learned that it's not okay for kids to hit her or make her feel bad.

Now in 1st Grade at a different school, Emily is back to being the girl with "an uplifted spirit that loves school and performs remarkably." Yet, in certain situations, she still fears running into "SAD HEART CHILDREN."

An accelerated reader with a vast vocabulary for her age, and a book fanatic since the age of three, Emily reads at a 3rd grade level. As an example, she just finished reading “The Principal's New Clothes” last week!  Mom says that Emily is going to love reading encouragement letters from kids and teens at the Be-A-Friend Project!

Emily loves to draw and is quite an artist!  This young talent won a FIRST PLACE Achievement in the Arts Award (above) this year as a special artist and has been chosen to compete in a county-wide competition!  (Fish below by Emily!)

Advice to All Parents from Emily's Mom:

3) Give your child a chance to speak.

4) Sometimes we don't know what's going on, but if our hearts feel  something isn't quite right, follow that instinct!

Kids on the Autism Spectrum have trouble understanding the meaning of tones of voice used by others, including sarcasm. As an example, we quote this explanation from autismspectrumexplained.com:

“Think about the simple word, "Hey." It's one word, but depending on the tone I use, you can deduce whether I'm pleased to see you, angry, afraid to talk, flirting with you, or trying to alert you to something. A person on the autism spectrum might struggle with the same exercise, or be unable to understand it altogether."

This trait can leave an autistic child (like Emily) especially vulnerable to being bullied when they are not aware words are meant to be mean.