Thanks for checking in! WE DELIVERED- and BOY, DID WE EVER!

"Robert has been busy reading all of his letters.  Each and everyone of them are so uplifting it is amazing. He has been a different child since that week. We can not thank you and the Be A Friend organization enough."

Robert may have been benched by bullies in 2017, but he opened the 3rd Season of the Be A Friend Project as our 10th Recipient to receive a delivery of “FRIEND MAIL”!

We surprised Robert with his record-breaking 1,103 letters of peer support IN PERSON by the professional youth cast of our anti-bullying "IT'S EASY! The Friend Strong Musical" at curtain call! Along with Robert's parents, we accomplished the surprise by enlisting the help of Dr. Claudio & Daniella Cerullo of TEACH Anti-Bullying - who referred Robert to us - to invite him and his parents along to the show; TARRYTOWN HOUSE ESTATE, NY, donated one night's lodging to Robert's family; and our CAST, CREW & CONCESSIONS all "ignored" the adorable 11-year-old throughout the show, even though the sight of him made our hearts skip a beat with love and suspense.

FINALLY, SEE HOW IT WENT DOWN... 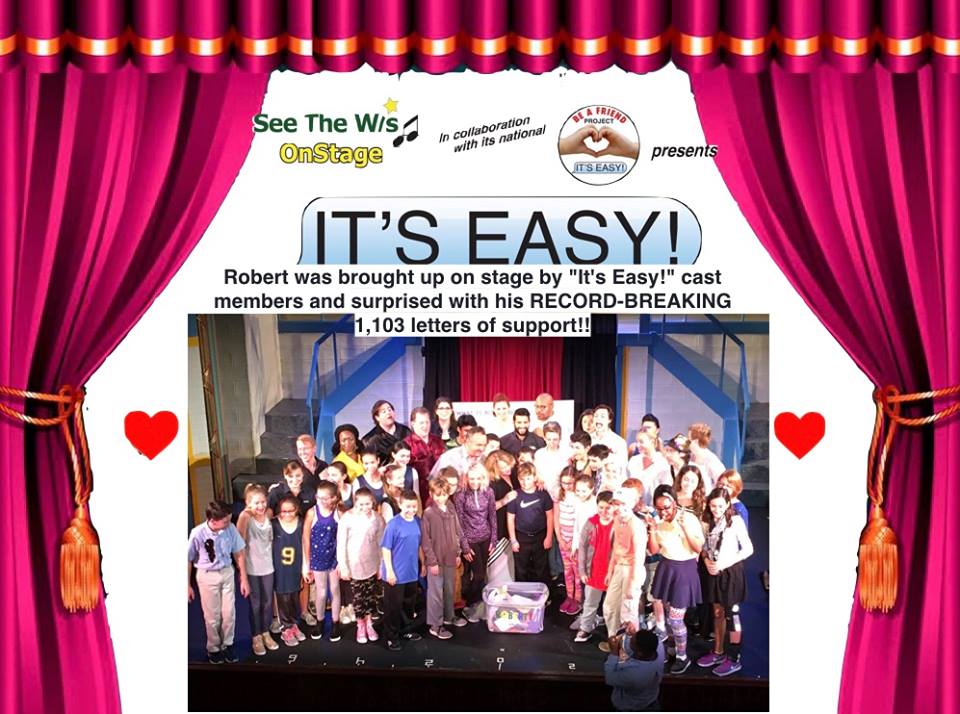 AFTER SHOW MEET & GREET WITH ROBERT:

ROCK STARS OF THE ANTI-BULLYING WORLD CAME TOGETHER TO SUPPORT ROBERT and attended our Meet & Greet after the show, along with Be A Friend Project Super Ambassadors from the cast and community! Anti-Bullying leadership included Dr. Claudio & Daniella Cerullo of TEACH Anti-Bullying, Egypt Ufele of "Bullychasers" and Sarah Goff of UNIFY Against Bullying who led the youths in doing the UNIFY Challenge (hands over mouth symbolizing the silence associated with bullying.)

ROBERT is proof for young victims of bullying to stay strong because things will get better!

After receiving his own Friend Mail, Robert volunteered to deliver Friend Mail to the next Recipient, Ethan, also from Pennsylvania - and their parents made the surprise happen:

for his FRIEND STRONG role in Ethan's surprise presentation - and for sending letters of support to other Friend Mail Recipients:

But Robert didn't stop there...

to another local PA bullying victim, ANTHONY - who was also referred to the Be A Friend Project by TEACH Anti-Bullying. TAB Founders, Dr. Claudio and Daniella Cerullo organized the surprise Friend Mail presentation and delivered the support, handed over by Robert who read his own letter of support to Anthony aloud!

UPSTANDER ROBERT also appeared on TV News with Dr. Claudio Cerullo of TEACH Anti-Bullying in PA to talk about his ordeal with being bullied, and he won the debate stage at his school.

Robert is "a nice kid with no attitude" who often surprises other kids with random acts of kindness. At camp, a little girl had no flip-flops, so Robert picked her up and carried across the street. At home, he met a little boy who couldn't afford a bike, so Robert decided to give him his own. When he sold his expensive go-kart, instead of keeping the money for himself, he asked his parents to help him find a way to donate the money to feed hungry kids. That's the kind of boy he is!

How could bullying happen to this caring crusader?

Robert’s first year in middle school as a 5th Grader started out great.  A likable, star athlete, he is also “articulate and smart." Robert’s friends included both boys and girls, with lots of typical middle school crushes among them. One day, the ten-year-old complimented a classmate, saying she looked “pretty,” which made another little girl feel jealous. That girl's friends excluded Robert from their group, calling him “mean” and a “cheater” and told classmates, “don’t go near him” and "don't like him!". The family began to get prank calls in the middle of the night calling Robert “ugly” and “fat." Classmates posted on-line photos of him with derogatory captions meant to hurt, like “retard."

Untrue rumors and gossip spread like wildfire through the school and escalated into a year of social, verbal, physical and cyber bullying.

When the BULLYING BECAME PHYSICAL, Robert showed self-control. A Junior Brown Belt in karate, he could have hurt his bullies. His school had a “zero-tolerance policy” to violence, regardless of who started it, and students were told that police would be called immediately. So, Robert never returned the bullies' violence. Despite, his bullies seemed to be tolerated and their bullying continued...

Robert was grabbed in a bear-hug by the neck and dragged down the hallway. While he ate lunch with his buddies in the cafeteria, Robert was picked up and tossed to the floor. Finally, that lunch incident was caught on school surveillance cameras. The administration put a “targeted student” bullying procedure in place to protect Robert… but it didn't help. A bully hit him in the head with a backpack of books causing a severe concussion, a bruise to the brain that takes several months to get better.

A valued teammate and gifted athlete in baseball and ice hockey, Robert had even been awarded MVP CATCHER of a baseball tournament! He was "devastated" when the concussion injury sidelined him from playing with his teams, due to doctor's orders. Usually a  main player in both his baseball and ice hockey teams, Robert was benched to ensure no physical contact. Months later, he is still not yet allowed to play contact sports while his concussion continues to mend.

Robert had to stay home from school for 8 days because of the bad concussion, and then attempt half-days only. When he finally did return to school, his headaches were so

bad, he would end up leaving class to go to the nurse's office. Still, kids taunted him, saying he was “faking it” and “liked going to the nurse.”

Robert became anxious about going to school and didn’t want to go back. He doesn't like to talk much about the bullying, but his mom, a nurse in a children's hospital, says she can see changes. Even very friendly teasing or pushing will trigger Robert into upset and memories of being targeted by his peers. To protect their son's emotional and physical health, his parents removed Robert from that middle school. Just turned 11 in July, Robert will start 6th grade in a new school away from his friends... and his bullies.

One thing is for sure, Robert's new school is about to find out HOW VERY LUCKY they are to have this kind, gifted 6th Grader join their class!

SPREADING RUMORS AND GOSSIP IS BULLYING

One of the worst kinds...

Spreading lies, rumors and gossip as a way to turn people against someone, embarrass or think badly of someone is a form of bullying. Spreading unkind gossip in person or through social media is not a kind, decent or mature way to act.

Most important, damage done to someone's reputation by rumors and gossip can never be undone. :(

Sadly, when other people see this kind of thing going on, they don't always stand up for what's right. They may become less friendly to the person who is being talked about because they're afraid of becoming the next target.

We don't have to be good friends with everyone — or even like everyone. But not liking another person doesn't give someone the right to spread rumors, gossip, or put-downs. Acting like this shows a lack of courage. It's a false way to gain popularity or status in a group.  People who are truly well-liked treat everyone with respect and fairness, even people who aren't their friends.

(Thanks to some wording from www.KidsHealth.org)